It’s a big year for birthdays (birthdays-slash-anniversaries), everyone. This year, my blog turns two (today, in fact — happy birthday, blog!), I will be turning twenty-nine (again), and we mark the 200th anniversary of the publication of Pride and Prejudice. 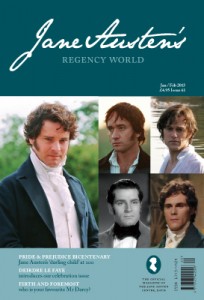 It will probably come as a surprise to only a few readers that I subscribe to Jane Austen’s Regency World, the official magazine of the Jane Austen Centre in Bath, England. The January/February issue is almost entirely devoted to Pride and Prejudice, and all sorts of other enormously interesting information, including the identity of the person of who won the auction for Jane Austen’s ring, Kelly Clarkson.

I must confess, I was a little surprised that it was Kelly Clarkson and not a mysterious-and-totally-imaginary secret admirer of mine who converses like Henry Tilney, believes that I could be “the Jane Austen of the Pacific Northwest”, and was saving the ring up as a special surprise present for my 30th (ahem, second 29th!) birthday…but I digress. It turns out a replica of that ring is totally the way to go (major hinting going on, for any mysterious secret admirers) because the United Kingdom declared the ring a national treasure, so Kelly Clarkson can never take it out of the UK.

But enough silliness. The main reason I’m writing tonight is regarding an article in this issue of JARW called “Choose Your Darcy”. That’s right. Amy Patterson, the author of the article, with whom I would very much like to take a turn about the room as well as tea, compares all the different actors who’ve played Mr. Darcy on the silver screen, and, most importantly, comes up with the right answer for who did so best.

Her favorite (and mine)? David Rintoul. Mr. Rintoul plays Mr. Darcy in a so-faithful-to-the-book-you-can-practically-read-along version of Pride and Prejudice that first aired in 1979. I realize I will be alienating many of my friends and probably 90 percent of the internet by not choosing Colin Firth, and my sister by not choosing Matthew MacFadyen, but as far as choosing a Mr. Darcy that most faithfully represents the Mr. Darcy of Jane Austen’s book and of my imagination, I too have to go with David Rintoul.

The 1979 version is not pretty. The costumes seemed quite wretched. But what can I say? Give me a version I can almost read along with and I’m happy, even if Elizabeth is really prettier than Jane. Also, it’s only four hours, instead of a whopping six, largely because it doesn’t insert scenes that Austen never wrote of Darcy emerging wet-shirted from the lake in front of Pemberley, and used only one or two scenes of Elizabeth walking to communicate her fondness of that activity.

Matthew MacFadyen’s portrayal (circa 2005) is…darned sexy. The best that one can say of that 2005 version is to remark on Matthew MacFadyen’s sexiness, and the fact that it’s one movie long. A faithful representation of the book, it is not (“My pearl for Sundays?” – heaven, give me strength!). Occasionally my sister and I watch the movie together-in-time, if not location, and madly text each other – because this is arguably the most romantic of the versions…and Matthew MacFadyen…and it can be watched in two hours or less, especially if you fast forward liberally, like we sometimes do. 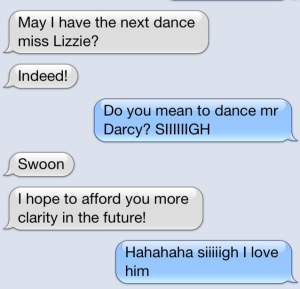 We weren’t quite at the same part of the movie here. Nonetheless, enthusiastic.

Cut from the image above was my saying something along the lines of “Dang. Matthew MacFadyen.” We aren’t always totally frivolous, either; here you find us actually discussing the story itself: 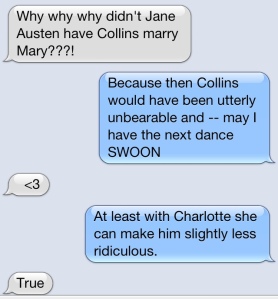 In between swoons, we discuss authorial decision making.

I just can’t give “best Darcy” to Colin Firth, because, much as I respect Mr. Firth as an actor and like his looks, he just wasn’t the Darcy of the book; he brought too much of the stock “awkward Englishman” to the role. Ms. Patterson says it best in her article in JARW: “David Rintoul, my Mr Darcy, gets closer than any other to capturing the essence of this wonderful, complicated, shy, angry and passionate hero.”

I’ll step down off my soapbox now. Which actor’s portrayal of Mr. Darcy is your favorite?

1 thought on “A Big Year for Birthdays”