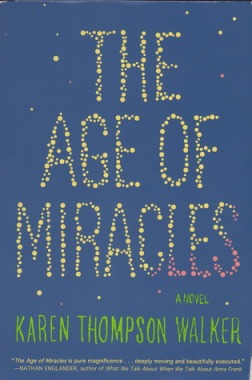 “Later, I would come to think of those first days as the time when we learned as a species that we had worried over the wrong things: the hole in the ozone layer, the melting of the ice caps, West Nile and swine flu and killer bees. But I guess it never is what you worry over that comes to pass in the end. The real catastrophes are always different — unimagined, unprepared for, unknown.” — Karen Thompson Walker

I would be hard pressed to name a better book among my recent reads than Karen Thompson Walker’s The Age of Miracles. When I finished it, my breath was caught behind a giant lump in my throat and I was for once thankful that the Josh Duhamel lookalike seated next to me on the plane I happened to be on was oblivious to what I was doing or whether I was, in fact, trying not to cry. (And that’s not a spoiler, because what makes me cry is a perfect ending: a story that knows when it’s told and ends in just the right way, with the right words.)

The Age of Miracles is the story of twelve-year-old Julia. She plays soccer, along with her best friend Hanna, and the last time that Hanna slept over at Julia’s house before a soccer game, the world started to end. That morning, before the soccer game, scientists announced on television that the rotation of the earth on its axis had begun to slow, perceptibly, and that just as there was no known cause, there was as yet no known solution.

And what comes after that? A beautifully-written, keenly observed story about growing up: the friendships that fall apart, the first loves, the loss, and the countless disappointments, against the backdrop of an impending catastrophe, in some ways not that different from the changing, uncertain world you and I grew up in.

“It was that time of life: talents were rising to the surface, weaknesses were beginning to show through, we were finding out what kinds of people we would be. Some would turn out beautiful, some funny, some shy. Some would be smart, others smarter. The chubby ones would likely always be chubby. The beloved, I sensed, would be beloved for life. And I worried that loneliness might work that way, too.”

There are so many examples of Karen Thompson Walker’s prose that I could share with you to try to incite you to read this book, but I’d be cheating you of the distinct pleasure of discovering it as you read, and a collection of quotes doth not a blog post make (generally speaking). Just…read this book. If there were some hallmarks of the first novel, if the foreshadowing felt, at times, a little heavy-handed, I ended up forgiving it.