Before reading Tinker, Tailor, Soldier, Spy, I thought I knew what a spy novel was. I spent my late teens devouring my parents’ Helen MacInnes novels like so many chocolate croissants so often mentioned in those books. I had expectations, going in, of what I would find: innocent civilians, in romantic locations like Prague or Vienna, unwittingly entangled in master webs of international intrigue and suspense, with a car chase (maybe two of these), and perhaps occasional fisticuffs.

John Le Carré more or less blew me away with Tinker, Tailor, and I don’t think he used a single explosion.

What is espionage, anyway? Certainly the covert operations and car chases form some part of it, but I think, far more often than the movies would lead us to believe, espionage is the painstakingly slow, taxing labor of people piecing together truth from snippets here and there.

And piecing together the truth is exactly what George Smiley aims to do, holed away in a hotel room in Sussex Gardens.

I bring up the hotel in Sussex Gardens (chosen for its proximity to Paddington Station!) with such specificity not for the crucial role it plays in the story but because it represents one of those moments I love about reading and traveling; that is, when you stumble upon something in a book that you’ve seen in real life, and you feel that inimitable stroke of delighted recognition. When I visited London in 2009 I stayed in Sussex Place, and crossed Sussex Gardens several times daily. 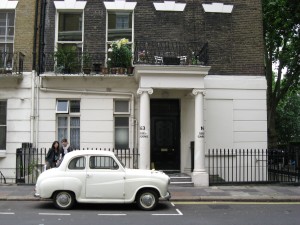 One of the best parts of the book for me was George Smiley himself: his grumpiness, his need to understand, his hidden romantic soul, even his disappointments were endearing, and you quite simply want him to win at the end. But ultimately, and quite as it should be, the very best part of the book is the ending, which strikes that perfect balance between telling and not telling: no one falls in love, wrongs aren’t suddenly righted, but as the pieces finally fall into place, it is with the sense that events could never have been otherwise.