About a year ago, my mom sent me an email about a book she had just read and really enjoyed, and so I downloaded it for my Kindle, and I finally got around to starting reading it a few weeks ago. It is a book about three very different sisters who make very different choices, and how their lives turn out, and frankly it was just a little heavy going for me, at least for right now. 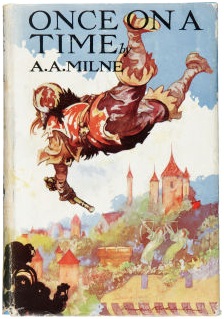 So I read something else, something that turned out to be the perfect book to read when the book your mother recommends to you is just too depressing, or when you miss your far-away friends, or when it’s an election year, or when there is weather of any kind, or, really, pretty much any time. Have you ever read Once on a Time, by A. A. Milne? If not, I think the time is now.

As a little girl I was delighted by Milne’s Winnie the Pooh books. As an adult (and still delighted), I attribute it to a long-standing appreciation for nonsense. Looking back on it now, there was a certain something in the narrator’s voice, something I responded to and trusted, something that said, “Listen, I am going to tell you a story,” in such a way that I had to keep reading.

Once on a Time has just that same quality about it. It is the story of the King of Euralia, his daughter Princess Hyacinth, and their friend the Countess Belvane. One day, the King and Princess Hyacinth are interrupted at breakfast when the king of a neighboring kingdom flies overhead in his magic boots. War ensues. Power struggles, princely quests, damsels in distress (maybe)…all told with supreme wit and in highly engaging style. For example:

“I am alone,” she said. “Dare I soliloquize? I will. It is a thing I have not done for weeks. ‘Oh, what a –’” She got up quickly. “Nobody could soliloquize on a log like that,” she said crossly. She decided she could do it just as effectively when standing. With one pale hand raised to the skies she began again.

…they set out with no luggage and no clear idea of where they were going to sleep at night. This after all, is the best spirit in which to start a journey. It is the Gladstone bag which has killed romance.

So great was my enjoyment of this little slice of fairy tale nonsense that, laughing in bed while reading, I forced house-guests to listen to my reading aloud from it with my nightguard in. (Which, if you knew my propensity to gag if attempting to speak clearly with my nightguard in, you would interpret as a gesture indicative of my great enthusiasm. Now, having shared that delightful detail about myself, you know.)

In the preface, Milne explains that he wrote Once on a Time to amuse his wife and himself in 1915, “at a time when life was not very amusing”. If you, like me, have lately found yourself in need of a little escape from oneself and/or the world at large, this little overlooked gem of a story might be just the ticket.

When I was a young child, I had pretty distinctive “likes” and “dislikes” when it came to reading. I was fond of thinking of myself as an avid reader, but I refused to read (unless required) any books that had boys as main characters (too boring, according to me, then). I also refused to read any books that used overly dialectal dialogue (especially if that dialect was in any way backwoods-y). Also, not being myself a fan of being dirty, I didn’t really like to read stories where the characters were dirty and their dirtiness was a matter of description or discussion. No, I preferred stories starring female protagonists who were perennially clean (or I never heard otherwise) and spoke the Queen’s English.

Happily, my reading horizons have broadened, although to this day, I believe dialect is something quite easily overdone and very easy to get wrong. But I can now read books with male protagonists without getting bored, and while descriptions of filth might still induce a flinch or two, I can usually soldier through them. So it is a bit of a strange coincidence that when I tell you how I loved reading Neil Gaiman’s Neverwhere, for all its descriptions of filth and malodorousness, that the adjective that first comes to mind is “sparkling”.

I remember when I was young being a little surprised, on visiting the coast, that where the land ends and the ocean begins — something that appears so solid and well-defined on paper — shifts and moves around in real life. In my imagination it made for an intriguing between-space. Gaiman’s book reminded me a little of that daydream, because Neverwhere is about the cracks, and the things and people that fall through them.

Neverwhere is the story of Richard Mayhew, a young man living in London, who stops to play the Good Samaritan to a girl bleeding on the sidewalk and finds his life suddenly turned upside down. Suddenly, it is as though he never existed. In Neverwhere, there is a London Above, where the “normal” people live “normal” lives not seeing the people who have fallen through the cracks to London Below. London Below, where Richard finds himself, is a dangerous place filled with strange people who can  understand animals’ speech. (There are also a great many smells.) And in London Below, Richard’s adventures will require him to be very brave indeed.

If the great story were not enough reason to read Neverwhere, Gaiman’s prose sparkles:

“Metaphors failed him, then. He had gone beyond the world of metaphor and simile into the place of things that are, and it was changing him.”

And it is rich with literary allusion:

“There was hysteria in there, certainly, but there was also the exhaustion of someone who had managed, somehow, to believe several dozen impossible things in the last twenty-four hours, without ever getting a proper breakfast.”

To me, Neil Gaiman is a master storyteller, and in Neverwhere he has crafted (with an almost Dickensian facility for nomenclature) a modern fairy tale, full of heroes and villains and people who fall somewhere in between.

“It seems a very big decision to me, deciding whether or not to run away and join the circus. Perhaps he did not have enough time to properly consider it.” – Erin Morgenstern

The last time – well, really the only time – I remember going to the circus was some years ago. The Ringling Brothers were passing through, and I tagged along with some friends. I have to confess a certain amount of bewilderment from the experience. Mostly it seemed to me like a lot of action without a cohesive “story” explaining the performance.

Le Cirque des Rêves (The Circus of Dreams) in Erin Morgenstern’s book The Night Circus is a circus unlike any other, shrouded as it is in mystery, and so full of wonders and delights that, visiting, you wonder whether the wonders and delights are real, or merely visions swimming before your eyes. For me, visiting Le Cirque des Rêves (or the Night Circus, as many of its patrons call it, since it is open only at night) was not entirely different from my real-life circus experience: a bit bewildering.

In The Night Circus, two young magicians, Celia and Marco, have been set against one another by their respective teachers in a challenge which they will compete to win. Neither is intended to know their opponent; neither is intended to know that the challenge will only be won by the other’s death. But of course Celia and Marco meet, and quickly discover that each is the other’s opponent. And star-crossed as they are, they fall in love.

The Night Circus itself is the challenge, the “venue” as it is called in the book, but what exactly was expected of Celia and Marco was never quite clear to me, and I’m not certain it was ever clear to them. They contributed to the circus by adding attractions, and in doing so they would try to outdo one another, but the competition quickly faded as Celia and Marco fell in love. Soon their additions to the circus were essentially intended to be pleasing to the other, something they would enjoy: an ice garden, a cloud maze, a pool of remembrance. (It wasn’t clear to me how adding attractions which were intended to be beautiful, creative, and enjoyable to patrons would ever result in the other’s death.)

Aside from the lack of clear direction afforded to Celia and Marco, I found the story a wee bit hard to follow in places, skipping around from one place and character to another, and back and forth through time. Intermittently throughout, the narrative would be interrupted for a description of one of the circus’s many attractions, and while it was enjoyable to visit the circus from so many different perspectives, I never felt like I got to know any single character well enough to really care about them; and for me, the narrative itself was a bit cloudy. I found myself frustrated at times by the lack of clarifying instructions or explanation of why things were happening; the mystery that shrouds the circus itself in the story seems to shroud much of the narrative as well.

But the circus attractions! Those were magic. Morgenstern’s vision of this magic circus is almost cinematically vivid in your mind: its sights and smells and sounds; and if for these alone, The Night Circus is worth a visit of your own.